How do you unclog the wells of worship, sacrifice and faith? You dig out the dirt of unbelief and doubt.

The average depth of a household well is 100-500 feet, but sometimes you may have to dig as deep as 1000 feet before you hit water. Today we have companies who specialize in digging wells. They have special tools and equipment that allow them to locate water, dig deep into the earth, and blast through rock. But can you imagine for a moment what is was like for Abraham?

The Mediterranean basin is historically known for being partially filled and completely dried up time and time again. This left the area filled with layers of salt and gypsum as deep as a mile in some places! (Doesn’t that sound familiar? Partially filled and dried up time and time again. Every time you’re disappointed. Every time the enemy whispers, “you’ve failed.” When you’re betrayed. When you lose someone you love. The well is there to dip into when you need it so that you don’t become “dried up,” but if we’re not careful, the enemy will sneak in and just keep piling dirt on top of that well until it’s clogged up!)

But here’s the thing – water was and still is essential for life – Abraham knew the value of the work he was putting in. He knew the return would reach far beyond his lifetime and that by digging the wells, he was establishing a lifeline for future generations. His enemies knew that, too. That’s why, as soon as they could after Abraham died, they filled those wells with dirt. They clogged them up turning that well of pure water into mud, and eventually into solid earth.

Living this life is not a cakewalk. It doesn’t always come easy. Maybe you’ve dug and dug only to find yourself in the wrong spot, and experienced what it’s like to climb out of that ditch—digging your nails into the walls until you finally got your feet back on solid ground. The fantastic thing about God is that He’s given us a map. We know where the water is!

The temple was the central location for worship and sacrifice. It was the representation of their faith, and therefore the source of the water! Today, if you and I will put in the work … if we will dig deep at the feet of Jesus through worship and sacrifice and faith, there is a source of living water that will never run dry! Isaiah 49:10 says, “They will neither hunger nor thirst, nor will the desert heat or the sun beat down on them. He who has compassion on them will guide them and lead them beside springs of water.”

There is a reason the Bible refers to “salvation” as a well (Isaiah 12:3). Because our faith is not surface, sometimes you have to reach down deep and grab hold of your faith. Sometimes the enemy will try to throw dirt – filth – on top of your well to “muddy your water.” He’ll come at you from every direction to make your vision murky. But if you will dig out the dirt, just like Isaac in Genesis 26:18 “dug again” the wells his father Abraham had dug, you will find the refreshing of the water … of His Holy Spirit. Don’t allow the world to wash out your worship. Don’t allow compromise to take place of your sacrifice. A religion that cost you nothing, is worth nothing. And finally, dig out that well of faith by shoveling out the dirt of unbelief and doubt.

If you want to dig a well like Abraham that will establish a lifeline of faith for you, your children, and your children’s children, dig it! And dig deep. Don’t settle for a life of powerless Pentecost and compromise over conviction. Escape the muddy waters and release the power of the Living Water back into your life. 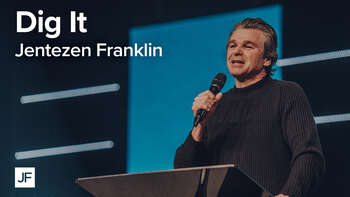