A Kingdom Connection Special From Eshkol | Interview with Michal Uziyahu

Eshkol is a region in southern Israel bordering the infamous Gaza strip. Until 2005, many of the Jewish families now living in Eshkol, lived in Jewish settlements in Gush Katif inside the Gaza strip. Many of them, like Michal Uziyahu, the young mother recently interviewed by Pastor Jentezen Franklin, believed that peace was just around the corner when Israel decided to disengage and move out of Gaza. Sadly, in her own words, they woke up to a new reality, “We became just like the people of Gush Katif that suffered every day ... We became the next frontier of Israel."

As the Israeli region bordering the Gaza strip, Eshkol is essentially an active warzone. They constantly cycle through periods of escalation and just weeks before our interview experienced an emergency encounter where 170 rockets fell in the Eshkol region alone.

Why then, do these family stay? We asked Michal that question, and here’s what she had to say:

I feel privileged despite all the challenges that you described. And I can share with you many tough moments that we had with the children with rockets, and with the fires, and the terror tunnels that we face. But I feel fortunate to live in Israel today and not 80 years ago in Europe. I feel fortunate that I live in a country that is a democratic country, and I have an army that is doing everything that they could possibly do to defend our people.

And we are strong, and we will continue to be strong. And, you know, I have my grandma – 90 years old – that is a Holocaust survivor. And I look at her, and I say I’m lucky. I can hug my children at night. I know that I have a country that is taking care of us, and I’m fortunate.

Israel is their home. Israel is more than the place where their house is; it’s where they belong. It is the land that calls deeply to the Jews. They are not looking for a refuge, or place to escape. They are fighting to hold on to what is already theirs. They are standing strong to protect home for future generations.

Because of the bombs that have hit, the ones they watch the Iron Dome explode overhead, because of the 15 second reality they live with day in and day out, 97% of the children living here suffer from post traumatic stress disorder. They’ve witnessed first-hand things at which most adults would shudder. They’ve seen the affect. The post-traumatic stress they suffer from is very real.

We don’t say post-traumatic because it’s not post. It’s something that we live every day.  We call it on-going trauma, and we try not to focus on the trauma. We try to focus on resiliency. It’s like a muscle. If you want to be fit, you need to work in the gym and work on your muscles. If we want to go through emergency, we have to train our muscles of resiliency. How can we become stronger and stronger?

To have a trauma center for children and for Holocaust survivors, or the elderly in this region, would be tremendous, I think, because it would bring the healing that is needed.

Praise the Lord, that indeed, our Jewish brothers and sisters are not alone! They do have friends. We believe as Christians that not only has God called us to comfort His people, but also He blesses those who do.

We’ve committed to building a new Eshkol Region Trauma Center. These unique facilities have proven to bring healing, happiness, and hope to families living in such areas. Staffed with trained therapists, residents young and old have a place to seek professional help learning to process and cope with the day in and day out stress unlike anything you or I can imagine. Equipped with an indoor playground, and built with reinforced walls to withstand attacks, families can seek shelter and children will have a safe place to play during extended periods of attack. Designed to include a community center and social gathering areas, old and young alike, especially the hundreds of Holocaust survivors living in Eshkol, will have a common place to gather.

Intergenerational interaction is of vital importance for the youngest children in Eshkol—And isn’t it really, for all of us? —The stories and history the Holocaust survivors can share with the children and young Jewish families gives them strength and perspective.  God stood with them then, and He stands with them now. And we stand with them now, as well.

Help us provide comfort to Israel. Answer the call of God to “Comfort, yes, comfort My People” (Isaiah 40:1). 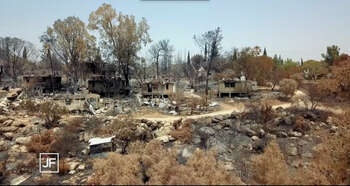