2 Killed, 6 Injured in Direct Hit on an Eshkol Community

Ohad, one of the places where Jentezen Franklin Media Ministries is building a bomb shelter, took a direct hit by a rocket. Two casualties, and at least six wounded. Below is an update we received from the Eshkol community, along with this video from Head of Security and Emergency Services in Eshkol Region, Keith Isaacson.

Following the latest bombardment of rockets, there was a direct hit on an Eshkol community. Unfortunately there were casualties—two people were killed and two people were seriously injured.

Rescue and security forces are still on the scene. Eshkol Residents were asked to go to their protected areas and continue to stay in them until further notice.

We are currently building the bomb shelter you have generously donated in the community which was struck by the tragedy today. Now, more than ever, we understand how important it is in order to prevent fatalities and save lives. Kerem Shalom's bomb shelter is currently full of children and activities are fulfilling its mission in the most efficient and life-saving way possible.

We would like to thank you again for your support in helping to save lives, protecting our residents and making these tough times more bearable. The impact of your kindness has been life changing for our residents.

Thank you so very much,

The Residents of Eshkol

Israel about 1 year ago 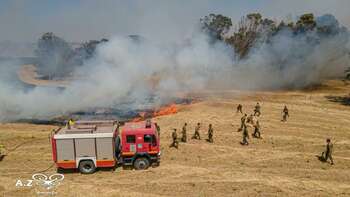 The Barrage of Rockets Continues to Pelt Eshkol