Are you feeling pessimistic and negative about your future based on how your life looks today? Well, I’ve got good news for you…God is planning your comeback! In Genesis 15, God revealed to Abraham what the future would hold and Abraham learned that he was going to live to a good old age (a covenant promise that also belongs to you and me, by the way!) and that his children would go through trying times BUT they’d come out of it with great substance and great promise. Did you hear that? They would likely go through some tough situations, but good would come of it! With each setback, error in judgment, or failure God was already planning their comeback.  And guess what? He’s been planning your comeback as well!

Maybe you have been struggling with finances. Perhaps your marriage has been suffering and you’re feeling lost and alone. Have you strayed from God and felt unworthy to return to Him? Maybe the doctor has given you a health report that has left you and your family reeling. In times like these, the temptation is to crawl into a corner and weep. Listen! We serve a God who can give a comeback in EVERY situation! Each of you is poised to have a comeback! Glory to God! A comeback is waiting for you! You simply have to have faith to believe it’s true.

Let’s look at someone in the Bible who had a great comeback… John Mark. The apostle Paul pretty much said, “He’s a loser. He’s a weak Christian. He had the call, but he messed up!” I don’t know about you, but I’d have a hard time coming back on my own from something like. But let’s fast-forward…in 2 Timothy 4:11, Paul said, “Send John Mark for he’s profitable unto ministry.” Now that’s a comeback! John Mark went from being a loser to being respected in the ministry.

God has perfected the comeback. Cry out to Him and ask Him to do it one more time. Do you need a spiritual comeback? Physical? Maybe you’re in the darkest place you’ve ever been in your life and you feel hopeless. God, the perfecter of the comeback, is waiting to meet you where you are. Just turn back to the Father! He will run to you and you WILL have your comeback! 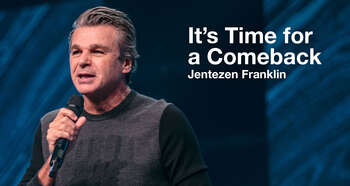 It's Time for Your Comeback - SET